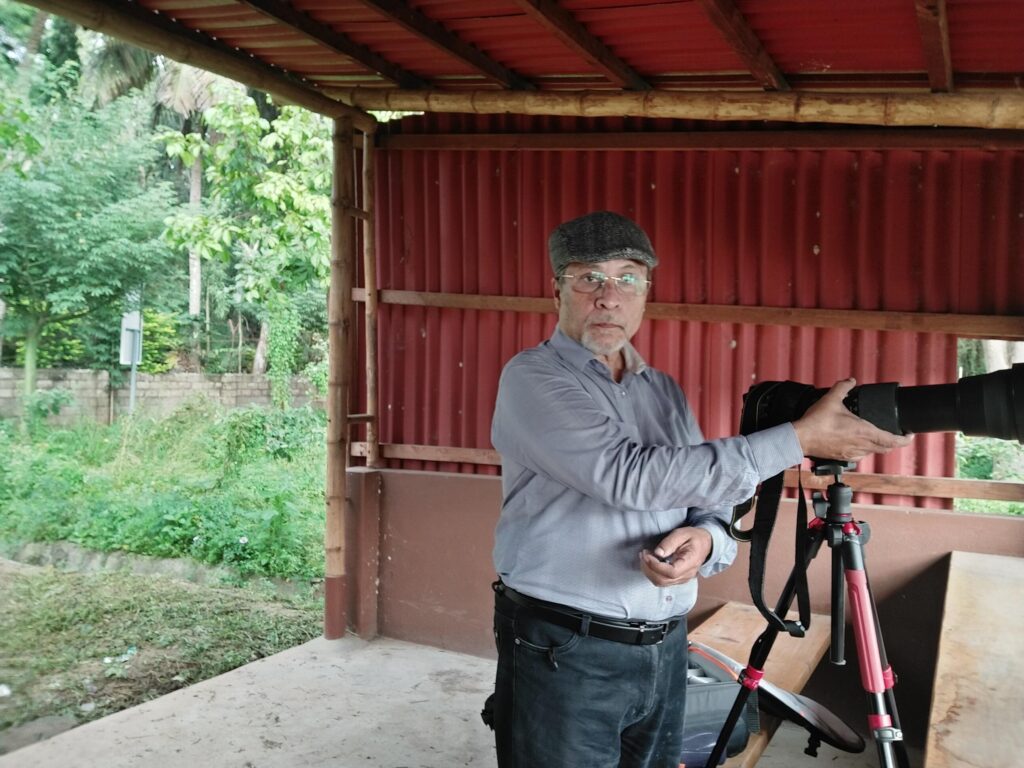 About V SELVARAJAN, OUR FOUNDER

V Selvarajan, founded Green Circle in 2002 when he was in Delhi. However, his environmental path started in his early days even as he was pursuing his graduation in Bishop Heber College, Tiruchirappalli, Tamil Nadu way back in 1973. As an youth, he bagged Rotary International’s Youth Merit award from USA for organizing village adoption project, health check-up camps, anti-dowry campaign, Energy conservation and traffic regulation drives. He attributes his love for birds as his first step towards Nature conservation and environmental commitment. Today he fondly quotes his Prof. Daniel Wesley (Zoology) as the person who created interest in study of migratory birds during his college days. In 1975 he joined Wildlife conservation Society [WILCOS] Trichy and actively involved in bird watching and wildlife conservation projects.

Joining the Banking career in 1976has changed the direction of his life andbeing a bank employee, his urge for social commitment dragged him towards trade union movement. Nevertheless, his love for nature and birds never diminished, though frequent transfers in banking career deterred his involvement in social activities.

It is only in 1988 when he was posted as an officerinSyndicate Bank Erode, he met MrGParamasivan, GP, as he calls him fondly. His acquaintance brought him back to the environmental activities. Elected as President of Erode Environmental Society, he started working for environment again with renewed spirit. During his tenure as President, he organized rallies and street plays to highlight environmental issues. He was instrumental in check-listing the birds in Erode District and identifying a lake near Erode as birding spot which was later on declared as Vellode Bird Sanctuary by Forest department. He founded Institute of Nature Studies to carry out research projects.

Again, he had to relocate him in Delhi, thanks to his Banking career. In Delhi, he started working as voluntary advisor for DTEA Senior Sec School, managed by Tamils in Delhi an inspired the students to start an eco club by name Jungle Venture. However, he realized the need for making an organized efforts by forming an NGO in 2002 and with a few like minded persons he founded Green Circle, a registered association to initiate environmental activities in Delhi. Sooner than later, he realized that forming an NGO is not enough to create awareness in a busy metropolis where people do not spare time for social activities. With great difficulties and financial constraints, he started working for the cause, sparing some funds from his own earnings and donations from well wishers and friends.  The work initiated by him in creating environmental awareness among the children of a residential colony attracted media. He identified a lake amidst concrete jungle of Delhi which is a safe winter home for the migratory birds from far off places of central Asia. He check-listed the birds in the lake and highlighted the problems faced by the lake. This has attracted the attention of the authorities. He could create interest among school children to sort out the problems of the water body. “But thanks to Bureaucracy’s reluctance” he laments, “Sanjay Lake’s environment has become worse, thus threatening the migratory ducks to visit forever”.  A relentless environmental activist, he still tries to spare more time as he has taken voluntary retirement from his promising career in pursuit of his social concern – the environment

He migrated to Dwarka New Delhi on retirement and after taking a new training assignment in his Banking profession. On reaching Dwarka, he realized that he need to give back to the Society in many a way besides his freelance training profession in foreign banks. He had sufficient time to do a lot. Without wasting time, he was in touch with some social-minded people. He got elected as Secretary of his Group Housing Society which got him exposed to a lot of social workers concerned about the environment.

Selvarajan was sure that it is the Kurukshetra for launching his environmental activities once again. Garbage burning was going on unabatedly. He successfully spearheaded a protest march against Garbage burning. Air Pollution was reaching its peak as construction activities mounted. He called EPCA council chairman MrBhurelal to Dwarka whose intervention stopped burning and construction violations. Selvarajan organized the volunteers and successfully implemented Saturday Shramdaan Program for plastic waste removal from parks and public places. He also simultaneously started a Tree Adoption Project and planted trees in parks. The volunteers identified Peepal trees which are cluttered with Puja Waste. There was opposition from devotees to clean the tree surroundings. To counter the opposition, he named a program as Pavitra Peepal Project and started cleaning the trash. The program was well received by all and media highlighted the project extensively. The projects are ongoing except for Covid days. He also raised his voice against nailing trees. Under his leadership they fought the redevelopment project in Sarojininagar by filing a PIL. The conversion of Bharat Vandhana Park in Dwarka as amusement park despite the dharnas initiated by him, he feels is unfortunate and due to lack of coordination among Delhites. But Dwarka was indeed a great battleground for him to fight for the cause of environment

An ardent environmentalist, he conducted environmental awareness workshops for school children. As a birder, he has held several birding expeditions and photographed birds in every part of the country. Ever increasing pollution coupled with the extreme weather, he had to relocate to Bangalore in July 2021. He believes that place is immaterial for anyone who is interested in the upkeep of the environment. He is now connected to several environmental organisations in Bangalore and is contributing to nature as usual. His desire is to record all birds of India in his lifetime. His desire is to take in charge, a big stretch of wasteland and convert the same as greenery in the remaining part of his life. His journey to protect environment continues.

“As long as I live, so long I will protect environment”

A FEW MILESTONES IN HIS JOURNEY AS ENVIRONMENTAL ACTIVIST